The title is a play on one of my favourite quotes, "Culture Eats Strategy for Breakfast", often attributed to Peter Drucker

Hurricane Sandy was the largest Atlantic hurricane on record. When it hit the North Eastern United States and eventually Canada, even some of the best prepared businesses were rendered painfully impotent.

I manage my church's website. It is hosted on SquareSpace, which has their data center in lower Manhattan at Peer1. This is a very impressive and very ready-for-anything organisation. They take their ability to keep people's websites and infrastructures running very seriously, even through the worst of disasters.

The fact that Sandy was out of the ordinary really hit home when I received this email from SquareSpace the day after Sandy made landfall in New York:

Of course, being after the time listed, I checked my website and was a little surprised to see it still broadcasting. Hmmm, maybe it's a cached copy or something.

Right off the bat I was a little saddened by what people there were going through and was impressed by the quick communication and frankness of Anthony's letter. While he was still dealing with this major disaster pressed upon his family, friends and peers, he was also realizing that his company's trusted infrastructure for their trusting clients was about to become completely useless - AND he decided to let clients know and even apologize in advance. How many businesses took calls from their customers over the next week after the fact and simply said "What do you expect? We had a disaster here! Of course we shut down."?

In this global economy where the rest of us maybe watched what went on with interest, there are some that probably didn't care, and maybe didn't even know. Plus, there are probably businesses that don't operate in the Eastern US that may have been affected as well. Regardless, the communication to your clients needs to be taking their context into mind, not just your own.

Well, today I received this email as a follow up:

What an incredibly inspiring email.

I was thinking about what type of culture these businesses have. When we get hit with winter storms or crazy weather, or even a little-too-much-fun office party, do your people still show up? What does it take to keep your staff from doing their job well? Do they really have your clients' best interests in mind? I'd say these guys do. I'd have to say they're all in or playing full out or completely engaged (pick your favourite boardroom bingo term).

In stark contrast, I visited our neighbourhood  ice cream place one evening, deciding to encourage my wife with her favourite food group (yes, ice cream is a food group, according to her). As I walked into the store, the bell rang clearly as the door hit it signaling to the folks in the back that they had customers. I started looking at the vast choices and, after a short period, started to wonder if the bell didn't do it's job. There was no one coming to help me. I called "hello" and started walking towards the back to get someone's attention.

Then I saw her. 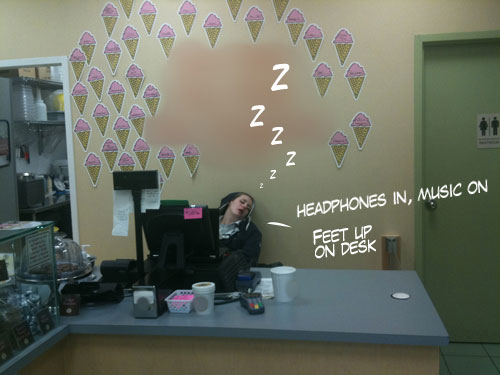 You may not be able to see it in this picture but her boots are up on the desk, keyboard moved, her headphones are in and she's fast asleep. Honestly, I could have taken enough ice cream to last a year and she wouldn't have noticed. I even tapped her a few times (my wife really loves ice cream) and she didn't even budge.

In the pseudo-words of Luke Skywalker - this is NOT the culture you're going for.

As the Drucker quote suggests, culture is far more important than strategy. Both companies discussed had a strategy, probably even very good strategy, and both failed. Culture won out.

Now, I haven't interviewed both parties but there are a few differences between these companies that I can guarantee:

And how about this one:

Sometimes we think of culture as an internal program, something to ensure we keep the people we have. We try to merely hold things together rather than strive to make something that has world-class impact. This impact affects the internal team as well as those who interface with the team. Everyone from friends and family to clients and even the world.

A world-class culture takes time to build. It comes from aligned values. Those values come from the right hires, the right message, constant work and almost insane levels of communication. An all too common mistake is that the values are dictated from the top."The board had a meeting and we feel these are the values we're going to enforce - post it everywhere and get that really nice acrylic plaque with our values etched into it for the lobby".

But the values that lead to a great culture have to come from within the teams. They also can't come from a 30 minute lunch-and-learn that only really fills in that boardroom bingo card. A leader has to share genuine value-based stories from personal experience, and when they connect, similar stories will come out of the team members. Leaders must take one on one time with team members and listen to get to the heart of the matter and eventually, through collaborating with the individuals, the teams will start to align, rally around a set of core values that resonate with all, and dramatic transformation will happen.

The benefit of this can certainly lead to inspiring stories like SquareSpace's. Hopefully a force of Sandy's magnitude will never test it! But that being said, you'll really notice that day in and day out the calibre of work will go up, the teams' engagement will go up, office happiness will go up, sickness and absences will go down and you won't be afraid of any unexpected disasters. Your team will rise to the challenge.

Now if you'll excuse me, I have a hankering for ice cream.

If you want committed team members like the lot around Peer1, reach out to me.

Where have you seen culture make a difference (good or bad)?