Reach the Candidates You Want

I had a conversation the other day with a client. He asked me about a company who had reached out to him to sell him the latest version of software/process to bring in candidates. They promised a radically new approach, something that no one is doing and guaranteed to bring you more candidates than everything out there. He asked me to take a look at it and give my thoughts. 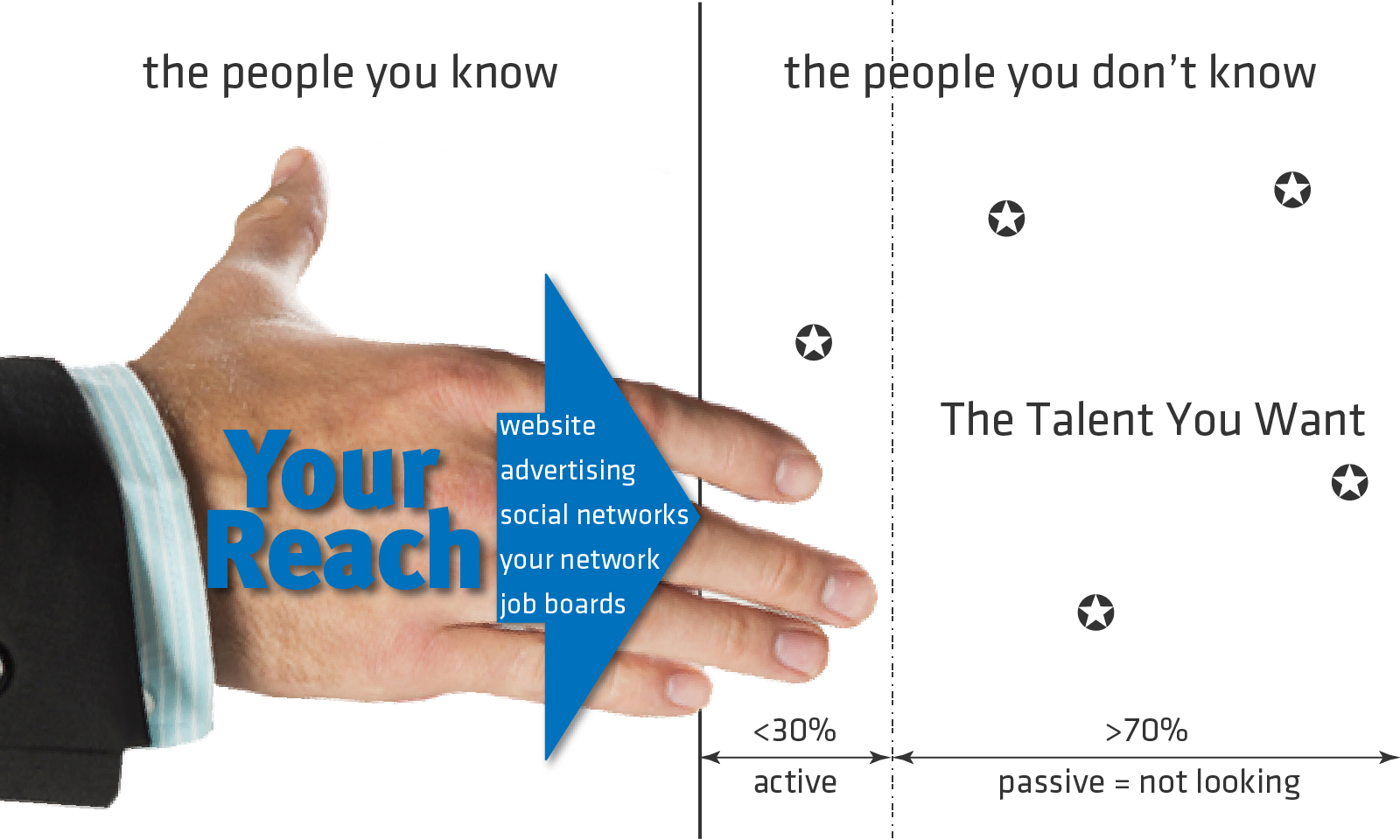 After taking a look, I came up with this.

Sure their approach was different. It did address some flaws and I'm sure it would get a couple more people. Yet, it didn't come close to addressing this problem. It was simply a better way to advertise. And to me, that's missing the biggest opportunity in recruitment.

Our reach into the world is through Social Media, Advertising, our people networks, our website and job boards.

As we reach through the people we know and out to those we don't yet know, our reach is limited to anyone who is listening. This is the core of the problem in any marketing attempts... not just for people to hire. Although, for the purpose of this blog, we're talking about candidates to recruit.

It can be argued that a very small piece of the market (I use Lou Adler's calculation of 14%) is looking for work at any time. This is made up of people out of work, those about to be out of work by their purpose and by being fired, and a bunch who are presently unsatisfied and looking around.

I don't know about you, but that group doesn't seem to be rich with the cream of the crop. They aren't working, they might have been fired, are about to quit or dissatisfied enough to be searching the job boards instead of working. There are always exceptions but you get my point.

We want the ones that are "heads down happy". They're working for someone, maybe a competitor and maybe a different industry, they're content enough that they're not paying attention to ads - even if Google or Apple is hiring. Those companies are always looking for people but most people aren't going to go apply because it's a pipe dream or they're "happy enough" where they're at.

What I'm saying is, we can have the best and most flashy advertising, the best stories and all the fanfare in the world about how awesome we are to work for - heck, we could even put a billboard outside our competitors door - and still there is a large portion of your hiring pool that won't even notice.

Remember those Apple jobs? Do you think a candidates attitude would change if Apple called them and initiated a conversation? uh huh.

Lou also talks about how 81% of the passive market, when they move, get jobs through internal promotions and networking - a friend calls and tells them about the job. Again, an initiated conversation.

You can see where this is going. How important is a conversation?

Everything we're doing to attract the candidates we want needs to centre around the idea of a conversation. Yep, it's more work. However, it doesn't have to cost $10,000's to pay someone else to do it for you. As recruiters (I've been hiring and recruiting for 20 years) anyone can do it. It's just a matter of how you do it. Amazing tools in the hands of a poor carpenter will not make a great house. That being said, it is possible to learn how to have conversations that attract people.

Here are five steps to having a conversation that will reach the candidates you want.

There is obviously so much more meat you can put on those bones. Just work on finding a way to build on each of the listed areas.

Where have you found it best to look for your candidates?